Battle the Bear, by Rachel Harris

I think I had a little too much fun racing Battle of the Bear. That morning I woke up early, and could not get back to sleep. My dad slept past his race, so I ended up hoping in my Subaru and drive down to Golden. I arrive at the park ready to race. The stream was beautiful, and I liked the venue of the race. Music was playing, and everyone was hanging out under team tents.

While warming up with the team I had tons energy. Johanne and I kept singing “Come and Get It”. It felt like the perfect day to race, but everything caught up to me. I didn’t sleep well the last week because of school, and I had a glass of milk for breakfast. I made some poor decisions, and was not feeling my strongest.

We got on the starting line. The only girls in the category was Johanne and I. This always messes with my mind because it’s hard to compete with a great friend. I was a bit nervous for the start because it was my first race this season. Also I was not in the right mind set to race. I was thinking of typical teenage girl things. Guys were running though my head, and school has been stressing me out lately.

The first lap was all out. I had Johanne in sight, and there were people my age around me. The second lap I think I took a bit to easy. I plan to fix that next time I race. By the end I had used up all the energy from the glass of milk, and struggled through the flat section. I finish freezing cold, and my legs were super tight.

Over all it was a great race to start my season with. The course was awesome, and the single tracks down hills were a blast. I loved hanging out with the team, and others. Hope to see everyone out there racing in Durango. Just got my number in the mail. I’m excited all ready. 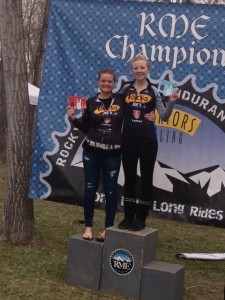