Waking up at 5:30 was tough. My stepdad Jeff, my brother Garrett (Big Garrett from the Tokyo Joes team), and I loaded up the car with the four bikes and dozens of water bottles. We then headed out towards Winter Park. Afer arriving, we went to go register and then drove to the middle of nowhere where the race would start. About an hour after we got there, my brother started his race (Expert men). We gave Garrett a water bottle handout and then got ready for our race!

There we were at the start line. My team and I had just done some warmup intervals and climbs. I felt ready! Before I knew, we were off!

I had an okay start, but since it was a climb right at the beginning, I quickly got into the groove and passed almost the entire group. The trails were mostly rocky dirt roads at first, but then it turned into smooth single track.

I had been in the lead for quite a while, so i had gotten my confidence up. Right before a switchback, my luck turned. I don’t really know what happened, but I somehow ended up on the ground. The crash didn’t feel bad at that moment since the adrenaline, but about a minute later my right thumb began to hurt pretty badly… like I couldn’t switch gears without having to clench my teeth. I rode with an injured thumb for a couple miles, until I reached the finish. I was in pain, but I realized that nobody from my age group had passed me the entire race… that meant I had gotten first!

Right after finishing, I headed to the medical station to get some ice. My thumb was still hurting really badly, but I was happy. 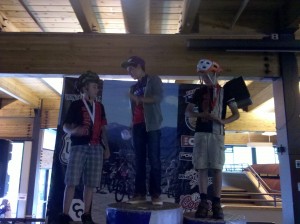