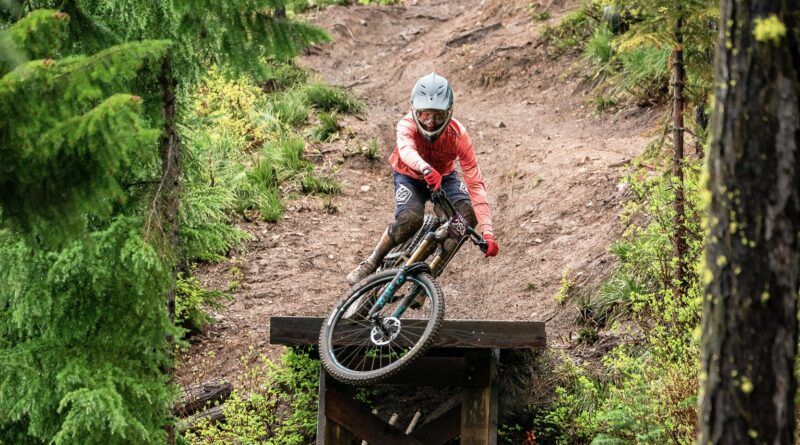 This June I made the trip to Silver Mountain Resort in Kellogg, Idaho for the North American Enduro Cup. This is a one-off event that is not a part of a series and most importantly, it is an Enduro World Series Qualifier. As a result, this race contains some of the hardest enduro riding in the U.S., with a mix of steep, technical and rocky terrain that descends as much as 4,000 vertical feet per stage. There are 6 stages over two days and the total timed sections would equal about 45 minutes.

Practice was only one day, as per Enduro World Series rules. I had six stages to practice and it had been raining non-stop all night. I knew the stages were going to be wet, but I didn’t think it would be too slick. I was quickly proven wrong when I crashed on the first corner of the first practice stage. From then on, I rode very cautiously and without confidence. But I continued through practice, still having fun and riding with friends. I got through practicing stages 2-5 smooth, other than the occasional pull-off because I got mud in my eyes. I started to gain confidence, but that confidence was quickly squashed when I had a huge crash on stage 6 practice. I came out of it with a serious knock in confidence and some whiplash. After that, I called it good for the day and focused on recovering for the race the next day.

I woke up on race day one sore from yesterday’s practice, and it had again rained all night. I started my transfer up to stage 1 at 8:30 am while the rain was still coming down. I climbed for an hour before dropping into stage 1. Stage 1 was the easiest of all of the stages but it also had the most pedaling. Stage 1 went well and my time put me in 3rd for the Boys 17 & Under. I felt that I carried good speed and I started to gain confidence by the bottom. Stage 2 was short but it was steep and fast and I was slowly building speed in the wet conditions. Stage 3 was another short one and it was on the lower part of the mountain. This meant it was dryer. Stage 3 was one of my favorite stages and was my best stage on day 1. I felt confident enough to push out of my comfort zone and it paid off with a good time. Stage 4 was the stage I was least looking forward to. It was super slick, it had lots of off camber, and it was super steep. I started the stage well but as soon as I turned off of the bike park trails and onto the fresh cut, it was a completely different ballgame. It felt like I was riding on a giant slip and slide. I had a small tip over which bent my brake lever. But I didn’t worry about it and I ended up having a good bottom half of stage 4 . Stage 5 was the final stage of the day and went really well. I found some flow in the mud which I hadn’t experienced yet that day. After a long day, it was time to rest up for day 2 of racing. My stage times ranged from 2nd to 5th place on day one, but the overall results would be decided on day 2.

Day 2 consisted of one top-to-bottom stage. It would descend almost 4,000 vertical feet and take around 17 minutes – that’s a huge stage! It didn’t rain the night before and it was pretty dry and grippy, other than the roots. I had a super good stage. I felt really good and I was able to manage my energy well. This was my best stage, and it was a nice way to end the race. I ended up in 3rd place overall in Boys 17 & Under after 44 minutes of racing. I am really proud and happy with this result. Overall, it was a good race and a huge learning opportunity for me.

I want to say thank you to my team, my parents, and everyone who helped make this a great event. It was an amazing experience.

Results for the North American Enduro Cup 2022 are here: