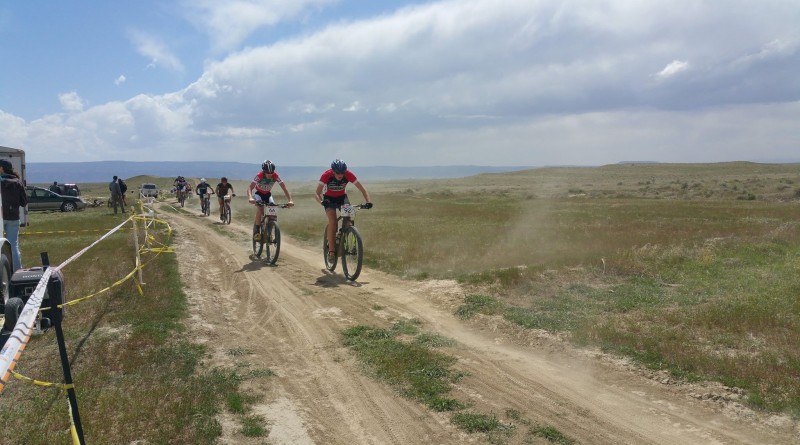 Leading up to the season’s first race, the final week of training was crucial. With Monday off, Tuesday looked like hill sprints. Wednesday was skills day, with plenty of bike related shenanigans. Thursday called for a recovery ride paired with some strength training. On Friday I did openers.

Race weekend started with a 6:00 am alarm, followed by an almost 5 hour drive. With Short Track starting at 2:00 pm, we rolled into the venue at about 11:45, leaving plenty of time to warm up. The wind was howling and dark black clouds were looming just over the horizon. The venue was a mess. Almost all of the course tape was shredded, campers’ tents were flattened, and tumbleweeds were in abundance. Dust stung our skin and pelted our eyes.

The nasty weather complicated start times, therefore all races were pushed back an hour. Just before 2:00 pm, the sky darkened; by 2:30 it was raining. The women’s race rode through light rain and gruesome wind.

Miraculously, at about 2:57 pm, the sky cleared. The sun appeared and the wind died. The rain had knocked down the dust just enough, to make perfect racing conditions. The Men’s Cat 1-2 Short track race had 32 riders. Off the start I pushed hard, in an attempt to better my position from poor staging. Seven laps and 20 minutes later, I rolled across the finish.

After a very fast paced Short track I was exhausted. We went back to the hotel, showered, changed, and met the team for dinner. Dinner took place at a pizza place in fruita. We overflowed 3 tables, and ate as much as we could. After dinner, I returned to the hotel to prepare for the next morning’s race. After a hotel room bike wash in the shower, a clean drivetrain, fresh Skratch bottles on the bike, Stingers on top tube, kit laid out, and foam rolling, I fell into bed.

An anxious sleep ended at 5 am. After eating cold oatmeal, we packed the car and drove to the venue. All of the tape had been re-done, the venue was set up, and a vibrant blue sky greeted us on race morning. Excitement was tangible. Sunday’s races started at 8:00 am, with waves every two minutes. After warming up, staging began at about 7:45. Boulder Junior Cycling had 19 athletes taking part in the race.

My race consisted of two laps on the long course with roughly 22 miles and 1,800 feet of climbing. The course had lots of fast singletrack and dirt roads. The beginning of the course was a rolling dirt road, followed by a long section of smooth singletrack. At the far end of the loop, there were a couple extremely steep climbs. Next, (my favorite section), there was a steep descent. Finally, the loop concluded with a dirt road sprint back to the start.

I finished 4th with a time of 1 hour and 34 minutes. Despite an unfortunate cow-pie incident and a slow first lap, this race was an overall success. My first Category 1 race went well. After cooling down, I was greeted by some cold chocolate milk, and leftover pizza. It was an awesome race weekend, and I can’t wait for the next one.