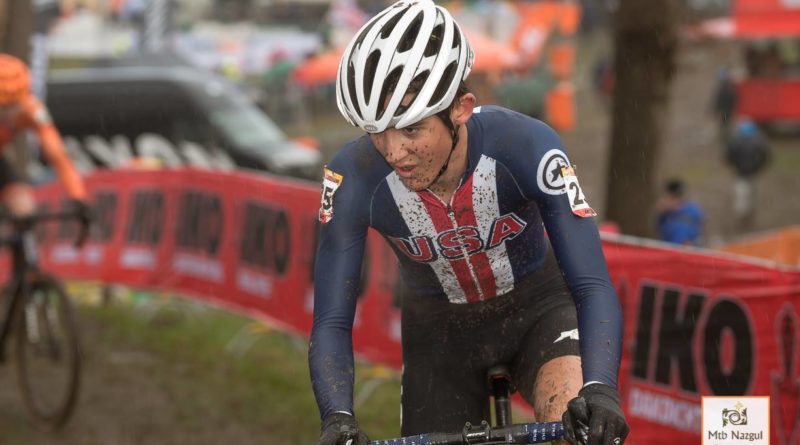 (February, 2019) My first World Championships was an amazing learning experience, and I’m super grateful for the opportunity. Going into it, I already had an idea what to expect from racing the Tabor and Koksijde World Cups over Thanksgiving block, but Worlds was the fastest, most chaotic cross race I’ve ever done.

The weekend prior I raced the Hoogerheide World Cup, which was my favorite course this season. It was crazy muddy and had some insane technical features unlike anything I’ve done before. On race day, I was prepared, got in a good warmup and had everything ready to go. I had a 5th row call-up, which was middle/back of the pack. At the start I clipped in pretty well but with the long straightaway and high-power mud I fell back. I got caught behind a crash over the flyover, and then another one a couple of turns later. I looked behind me and saw I was at the back of the field. This caught me by surprise. I recovered for a second and then went as hard as I could. I started passing as many people as possible. It helped that there was always someone for me to chase. I ended up finishing 32nd, which means I passed around 30 riders. My lap times after the first lap were encouraging.

I knew going into the World Championships I’d have to go as hard as I could on the first lap to avoid the same scenario. The support from USA Cycling under the new cross manager, Jesse Anthony, was above and beyond. I prepared well that week and got my workouts done along with stretching and massage. I ate well and felt good going into the race. We got there a couple of days beforehand with time to recover from the 8-hour drive and checked out the course. It was super fast with long straightaway sections, a couple run ups and one technical off camber. The course was icy in pre-ride but not too bad, so I decided to run a bit high pressure than usual.

We had plenty of time race day, so I made sure to get in a good warmup, allowing me to hit it hard first lap. I was totally ready as I rolled up to the start. I clipped in well when the whistle blew and sprinted as hard as I could. I didn’t lose too many positions and stayed same place around the first corner. I went really hard, but lost a few positions on the straights. I kept my head up, avoiding crash after crash. Still I wasn’t really able to move up too much on the first lap which was a problem. The race was so fast I couldn’t pass. The groups were separating and I was still far back. Throughout the race I was hurting and made some mistakes. I moved up a little, but it was very difficult on this course and I ended up 41st, which was a bit disappointing.

I know I’m able to do much better, which is what makes this disappointing. I really need to work on my power for next year. I have really good endurance which helps me throughout the race, but am hindered by my first lap where I come across the line at the back of the pack. My lap times are equivalent to much better results, but I give myself too much ground to make up after the first lap. I am able to get away with that kind of racing in the U.S. because the fields are small. But in Europe, my field is so insanely competitive that something like that costs you your whole race.

But I’m more motivated now than ever, and have a much better idea of what I need to work on next year with the goal of getting top 5 in Euro races and being competitive with the leaders.

I want to say thank you to all the coaches and sponsors of Boulder Junior Cycling and the Colorado cyclocross community, as well as USA Cycling and BRAC, for supporting me all season, and helping me represent the U.S. at the World Championships. I really appreciate the support!