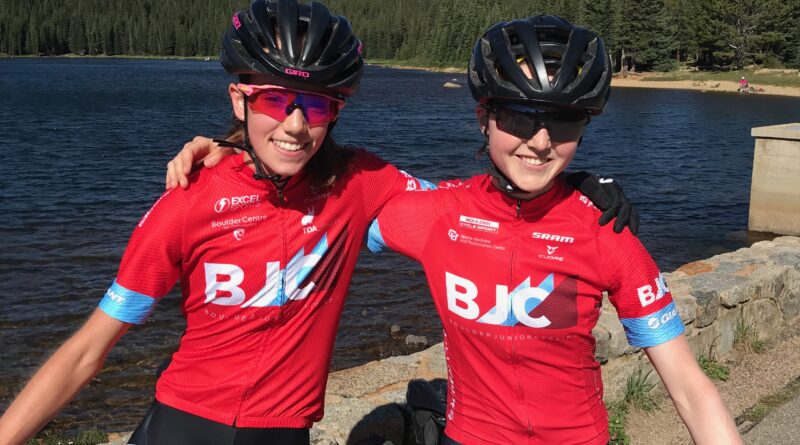 Ada’s Report:
This season I competed in my first mountain bike world championships. It was an incredibly hard race, but I brought home valuable experience and learned so much about racing at a high level.

The race week got off to a rough start when our bikes didn’t make the flight connection and were delayed a day, which shortened our course practice time from the anticipated three days to just one and a half. To top it off I crashed hard on the Beatrice rock garden the day before the race! But I was eventually able to ride every technical feature by the final course practice, and I was proud of that. This course was the limit of my technical ability when it was dry, but of course it rained the night before the race (!) making the rocks slippery and much more challenging.

I had a difficult call-up and did not have the best start but I stayed calm and made passes where I could. I wasn’t as aggressive as the riders around me, and going into the first technical feature, another rider made a very risky pass, caught my handlebar, and sent both of us face first into the dirt. Nearly everyone passed me as I tried to get up and get back on my bike and I was close to last as we came out of the first section of singletrack. I made up several spots on the wide open grass climb after the tech zone but I had to run the Beatrice rock garden because of traffic and a crash in front of me. I was rattled by seeing the crash, knowing that I had crashed the last time I tried to ride the Beatrice. The further I got into the race the more tense I became and I ended up running most of the features. I passed several riders on the climbs only to be overtaken on the descents and I lost confidence in my technical ability. Unfortunately I got pulled with one lap to go and even though I was frustrated, it was an amazing experience. I placed 36th of 49 starters.

This was my first race against a large world-class field, and while my coaches and teammates had told me that the race would be aggressive and chaotic, it was so different and challenging to actually be there and compete against the best in the world. The experience of lining up with such a strong field and seeing how riders from across the world race on such a challenging course showed me what international racing requires and how I need to improve. I learned to stay calm and focus on riding my own race even when things don’t go to plan, and to use my strengths to my advantage but accept my weaknesses.

I am thankful for my coaches, teammates, family, and everyone else who helped me get to the world championships and supported me throughout the process, as well as the USA Cycling staff who made this experience possible. I am looking forward to approaching next season with the confidence that I know what it takes to race at the world level and the motivation to improve upon what I accomplished this year.
–

This September I was given the opportunity to ride for Team USA at Mountain Bike World Championships in Mont St. Anne, Canada. My road started at the beginning of the summer when I was invited to travel to Quebec, Canada to compete in two Canada Cup races and participate in a training camp with some other USA juniors. During the camp we were able to preview the Mont St. Anne Worlds course and spend a couple of days of practice. All summer, my goal was to train hard to make it to the World Championship and after attending this camp and having ridden the course I was even more excited to be able to go to Worlds and race at the highest level.

The trip, however, did not begin as planned. When we arrived in Canada my BJC teammate Ada and I learned our bags and bikes had been left in Denver. We waited for about a day and a half before the airline finally delivered our bags. Being stuck at the hotel without a bike and equipment for so long was stressful, but it certainly showed me that traveling can be very unpredictable and many things are out of your control. And spending lots of mental energy getting worked up over bad situations won’t help in the end. With all our free time, my teammates and I spent lots of time playing cards and swimming in the pool. Eventually our bikes and bags did arrive two days before our race, leaving enough time to get a couple quality pre rides in.

The first day out on the course was tough and my bike handling was all over the place, as I was still feeling flustered and anxious from our traveling fiasco. Even though I had ridden the whole course earlier in the summer it was by far the most technical and challenging course I had ever seen and I was nervous about cleaning some of the sections. With extremely steep switchback climbs and rocky descents, (the most famous descent is known as “The Beatrice”) there was little time to recover or ride “easy” on the course. Not to mention that riding the course with talented riders from all over the world makes the course feel much bigger and more daunting. Thankfully I was able to ride with the USA skills coach Shaums March, who showed us new lines and showed lots of encouragement, which helped me get a feel for my bike once again. Once I finished riding the course I was able to get some of my initial jitters out of the way and the following day I was feeling much more confident riding the course.

Finally race day rolled around, along with lots of nerves and excitement. Coming into the race I had set some goals for myself but I knew that it was important not to put too much pressure on myself as this race was all about gaining experience and learning as much as I could. The start of the race didn’t go exactly as planned, I didn’t get off the line as quick and as smooth as I wanted to and this put me pretty far back in the field right away. This left me fighting for position the entire first lap but eventually I got up to 7th place fighting a Dutch rider for the last two laps. Mentally and physically this was the hardest race I’ve ever done. There was no time to rest between the steep climbs and gnarly descents and it took all I had not to give up and keep fighting. I finally crossed the line in 6th and collapsed. It showed I left everything I had out on that course, yet I knew there were many lessons to take away from the race. The biggest thing I learned (and want to improve) is how important it is to have confidence in my riding abilities and not getting intimidated by the riders around me. Even though I was able to nail certain lines through the technical sections in pre ride, during the race I let it get in my head when I saw riders ahead of me choosing to run or go around these hard descents and started to doubt my own abilities. I ended up running some of these sections as well after seeing others do the same. I now realize how much time and energy I could’ve saved if I had just stuck to my game plan and stayed confident in my riding through these sections.

After the race we celebrated with a big team dinner and ice cream but the sweetest moment of celebration for me came when I was able to see my dad and sister at the finish line and give a big hug to two of the people who have been so supportive and motivating throughout this entire journey.
In the end I am beyond grateful and proud to have been given this opportunity. The things I learned are so valuable to my development and growth as a rider and this experience only fueled my passion for riding my bike. Racing alongside my teammates and watching my mountain bike idols race showed me what can be achieved with hard work, dedication and a powerful village of support.

I want to say thank you to the team at Boulder Junior Cycling, as well as the people at USA Cycling that supported the trip. It was an amazing experience.