Note from the editor: Sorry for the late posting!

On Friday I left school early and was going to drive to Fruita with my dad. Unfortunately, he was admitted to the hospital due to a blood clot. Nervous that I was not going to be able to make it to the race,my mom and I started frantically calling people. Thankfully, Chris and his dad could give me a ride!

For the Rumble at 18 road I woke at 5:30 am, stretched and then and ate oatmeal with peanut butter for breakfast. After breakfast we packed up and drove to the course trailhead. I had done my pre-ride the night before so I went with Garrett along the road for warm-up. Our warm-up lasted about thirty minutes, following Ann’s outline.

We the lined up at the start line 10 minutes before we were to start the race. Right before the start, I realized I had to go take off a layer so I ended up in the back of the pack. Fortunately I was able to quickly catch up to the lead group. After the first major corner Garrett and I started to pull away. Going into the first small single track section I was leading, but Garrett caught me on the road again. Going into the second single track section I went off hard. My race went smooth all the way up the rest of the hill except for having to pass so much. I was able to ride both steep hills, and it was only after those two hills that I started meeting people who didn’t want me to pass them, which got very frustrating. Thankfully I was able to get on my own by the long single track, and I stayed that way through the end of the race. I did not like how bumpy the end was. After the race I was very excited, and surprised that I had been able to pull away.

As you can see, Gil has recovered nicely. 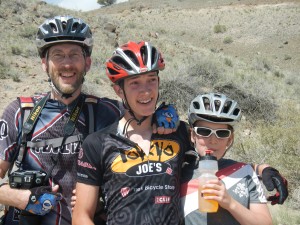